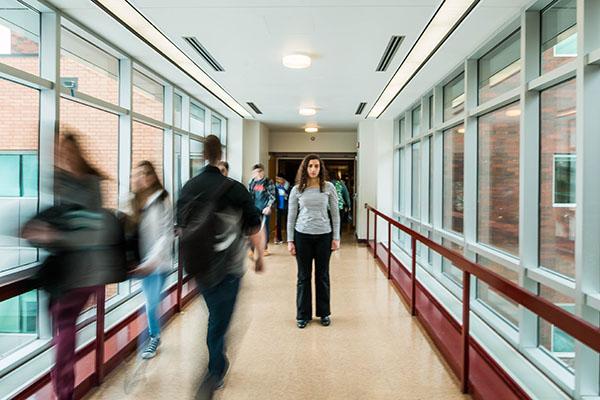 They’re gaining attention- there’s an entire Will Smith movie about them- and for good reason. Concussions, unfortunately common traumatic brain injuries, require special attention when it comes to the healing process and preventing them in the first place.

“You don’t feel like yourself,” said senior Mena Youssef, who has sustained six concussions in a year and a half. “I would walk through the halls and just be in a completely different world.”

All of Youssef’s concussions except one involved a volleyball hitting her in the head. For the first three, she worked with Gary Smith of the Institute for Athletic Medicine, who works as a medical observer for the NFL and Big 10 schools in addition to helping injured students recover at EPHS.

Smith explained that a concussion is essentially a “brain bruise” caused by the brain moving in the fluid that encompasses it and hitting the skull wall. They can be caused not only by direct head impacts but also by whiplash and shock that travels to the brain, meaning that car accidents and daily activities gone wrong can spur them, not just sports.

As he shone a light into his eyes to show how pupils normally react versus the the scattered and delayed reactions of a concussed person, Smith said that symptoms of this type of injury fall in a gray area rather than a black-and-white one. Although there’s no official concussion test, questions and a sheet with indicators such as headache, dizziness and drowsiness ranked on a 0 to 7 scale. It’s important to be honest about how you’re feeling, to allow for a swifter recovery.

The road to recovery from a concussion includes no electronics, reading or general brain stimulation for at least 24 hours. Doing these things while recovering can prolong the process. Next is therapy: running and exercising just enough to get the heart rate up to see how the brain handles it. If the symptoms return, then the athlete goes through another 24 hour rest period, and the cycle repeats until the symptoms don’t return. Only then is he or she given the go-ahead to return to play, which for the most people is within a week.

“School is one of the worst stressors, with all the noise and the bright lights and staring at the whiteboard,” said Smith, adding that teachers are very willing to help concussed students to avoid having them fall behind. Coaches and trainers are also teaching athletes to avoid putting their heads in precarious positions and working on neck strengthening to help dissipate shock to the head.

After the concussions, Youssef is no longer able to play competitive volleyball and instead was a manager for the girl’s varsity volleyball team this past season.

In the end, it taught her patience and how to deal with trauma. Offering a piece of concussion advice for other students, she said, “Protect your head, you need it.”